With Multi-core servers and modern operating system kernel, it can easily support 1 million TCP connections. The core issue is how to deal with business bottlenecks at the application level.

In the EMQX 3.0 version, from the Publisher to the Subscriber, a MQTT message flows with a series of Erlang processes Mailbox flows asynchronously inside the EMQXBroker:

EMQX open source products do not support message persistence within the server, which is an architectural design choice. Firstly, the core problem solved by EMQX is connection and routing; secondly, we think that built-in persistence is a wrong design.

Kafka made a correct design on the above problem, which is a message server based entirely on disk-distributed Commit Log.

After EMQX separates message routing and message storage responsibilities in the design, the function of data replication, disaster recovery and even application integration can be implemented flexibly at the data level.

In EMQX Enterprise products, through rule engines or plugins, messages can be persisted to both databases such as Redis, MongoDB, Cassandra, MySQL, PostgreSQL, and message queues such as RabbitMQ, Kafka.

EMQX Broker is more like a network Router or a Switch in concept, rather than the traditional enterprise-level message queue (MQ). Compared to network routers that route packets by IP address or MPLS label, EMQX Broker routes MQTT messages between cluster nodes by publish-subscribe model of Topic Trie: 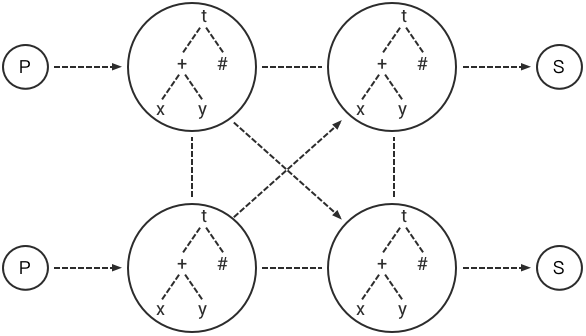 The MQTT protocol defines a 16-bit PacketId, which is used to send, receive and confirm messages from the client to the server. After MQTT PUBLISH packet arrives at the broker, it is converted into a message object and assigned a 128-bit MessageId.

During the end-to-end message Pub/Sub process, the published message ID and packet QoS are terminated at the session layer, and the MQTT message object identified by the unique ID is routed between the nodes:

The routing layer maintains the Subscriber and Subscription, and Dispatch message at this node with Pub/Sub model :

The distribution layer maintains a Topic Trie and a Route Table. The Topic Trie is composed of wildcard topics, and the Route Table maps topics to nodes: 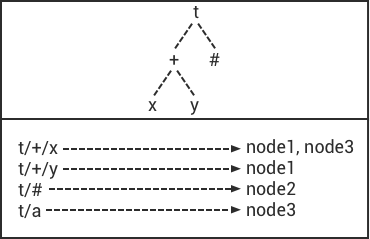 The distribution layer forwards routed MQTT messages between nodes in the cluster by matching the Topic Trie and querying Route Table: