EMQX is powered by Erlang/OTP, the highly scalable distributed platform.

Before we start talking about EMQX clustering, it's necessary to familiarise ourselves with Erlang/OTP.

Erlang/OTP is originally a programming language platform designed by Ericsson for the development of telecommunication equipment systems.

Telecommunication equipment (routers, access gateways) is typically a distributed system that connects the main control board and multiple business boards through the backplane.

Erlang nodes are identified by a unique node name, which consists of two parts separated by @:

Communication between nodes is addressed by node name. For example, start four shell terminals locally and then use the -name parameter to start four Erlang nodes, respectively:

We now go to the console of node1@127.0.0.1 and check the current node name and connected nodes:

Then we let node1 initiate connections with other nodes:

Now we can check other nodes that are already connected to node1:

We can see that node2, node3, and node4 have established a distributed connection with node1, and these four nodes form a cluster.

Note that whenever a new node joins the cluster, it will establish a TCP connection with all the nodes in the cluster.

At this point, the four nodes have completed the mesh structure shown in the following figure: 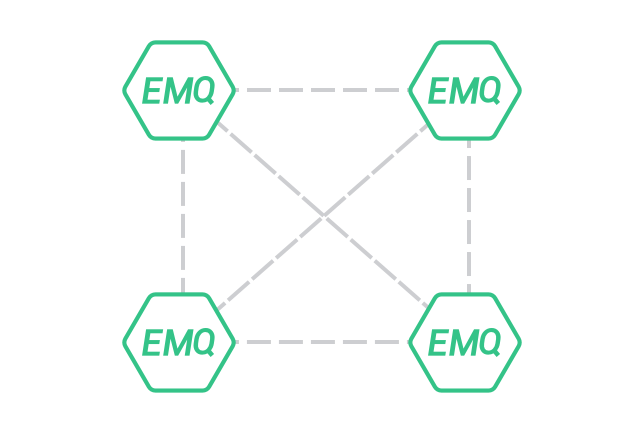 The basic function of EMQX Broker distribution is to forward and publish messages to subscribers on each node, as shown in the following figure.

When an MQTT client subscribes to a topic, EMQX Broker maintains a Subscription Table for the Topic-> Subscriber mapping. The subscription table only exists on the EMQX Broker node where the subscriber is located, for example:

All nodes in the same cluster will copy a topic-to-> node mapping table, for example:

In addition to the routing table, each node in the EMQX Broker cluster also maintains a backup of the Topic Trie.

The following topic-subscription relationship is an example:

When all subscriptions are completed, EMQX Broker maintains the following Topic Trie and Route Table: 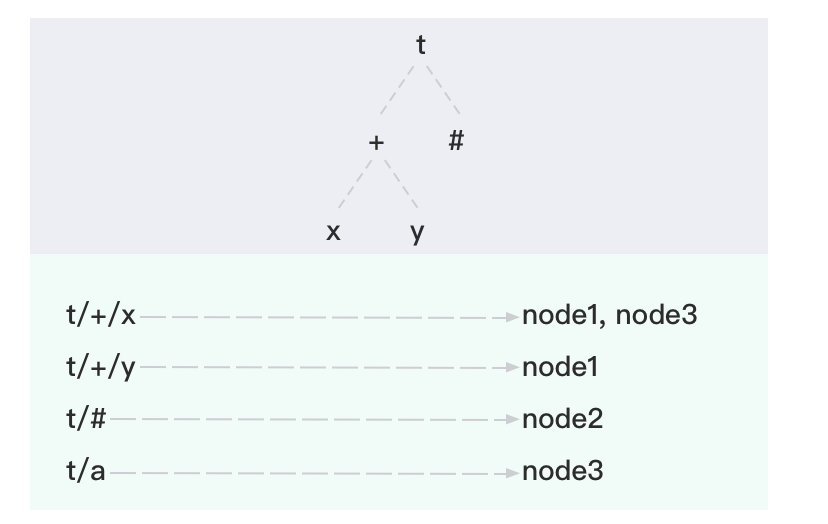 For example, when client1 publishes a message to the topic t/a. The routing and distribution of the message between nodes are as follows:

EMQX Broker's subscription table is partitioned in the cluster, while the topic tree and routing table are replicated.

On top of distributed Erlang, EMQX added an abstraction layer from the [Ekka] (https://github.com/emqx/ekka) library.

Note: mcast discovery strategy has been deprecated and will be removed in the future releases.

Each node in the Erlang cluster can be connected through TCP or TLS, and the connection method can be configured in etc/emqx.conf:

EMQX supports cluster Autoclean, which can be configured in etc/emqx.conf :

With this enabled, the disconnected node is automatically removed from the cluster after the configured time interval.

After some learning, it's time to start clustering EMQX nodes.